History is difficult to replicate. Many cultural relics will not be restored once they are destroyed. For this reason, the significance of the Danish â€œold cityâ€ is so special. It not only shows the history and customs of Denmark, but also reflects the Danish peopleâ€™s nostalgia and cherish of history.

In the toy museum , people will be able to feel that the concept of male superiority in Europe in ancient times has penetrated into the design of young children's toys.

The groom drove in a horse-drawn carriage on a deserted path. The peasant woman wore a long dress in the field, and the craftsmen polished the tools in the workshopsâ€”these were typical European townships of centuries ago. Time has passed, people seem to be able to recollect the customs and customs of the time by books, movies, and paintings. However, the â€œOld Townâ€ museum in Aarhus, Denmark, can give people a sense of time and space, bringing life experience to a real and lively Danish traditional market town, enabling people to live in a fairy-tale town in the Andersen era. Style.

The "Old Town" Museum (Den Gamle) was built in 1909 and opened to the public in 1914. It is the first open-air museum in the world to showcase the architectural culture of the city. It consists of 75 village buildings from 20 villages and towns across the country. In the 20th century, it moved to Aarhus from all over the country. Here, people can see old houses built in different historical periods and representing different architectural styles. All the buildings here are carefully selected, mostly wooden houses, throughout Denmark.

The entire museum has 27 houses, chapels and kitchens, 34 workshops, 10 grocery stores and shops, 5 gardens, a post office, a customs office, a school and a theatre. Most of the buildings are open to visitors, and each room inside the building has been decorated in a different period of time, giving visitors a glimpse of the Danish secular style of centuries ago.

In some grocery shops, dining rooms and workshops, there are special staff members who act as typical characters in merchants, blacksmiths, etc., to attract tourists from all walks of life and to show them the traditional life of Danes. You can buy a small bagel in this old-fashioned pastry shop that is completely in line with the style and production method hundreds of years ago, while eating and listening to the four-wheeled carriages outside the window.

In the "Old Town" museum, the oldest building is a grocery store built in 1550, the most recent of which is a garden from the 1909 Aarhus National Fair. Most of the buildings ranged from the mid-18th century to the early 19th century, mostly in the style of a typical Renaissance.

Speaking of the history of the museum, he had to mention the Danish historian Peter Holm, who was the chairman of the European Society for Environmental History. In 1908, the local government decided to demolish the old "old mayor's house" and wanted to build a new project in the same place. Under the repeated efforts of Holmes, the building was preserved and will not be destroyed. The mansion was dismantled and moved to another place for reassembly and was exhibited at the Danish National Exposition in Aarhus a year later, which was particularly eye-catching in all historical displays.

The name "Old Town" was the "old mayor's house" when it received the first visitors in 1914. In addition to the Renaissance-style main building, it also included a small garden and another Renaissance-style building. Over the next half century, museums have grown in size through private or group donations from all over Denmark. In 1923, when Holmes learned that a large commercial building would be demolished, he managed to raise the necessary funds. The building consists of eight separate buildings that were transported in batches to Aarhus for assembly and opened five of them to the public in three years.

Holmes served as the curator for 31 years from 1914, during which he rescued 50 historic buildings from damage. His charity has become an indelible achievement in the history of the Danish Museum. Since then, the cities of Norway and Finland have followed suit and established similar open-air museums.

In addition to the buildings that show the towns and towns of each period, the â€œOld Townâ€ museum also houses five small museums, including the Danish Clock Museum, the Toy Museum, the Tableware Museum, the Ceramic Museum and the Textile Museum. The Toy Museum contains more than 6,000 toys from the 19th century to the 1960s. In the showroom on the first floor, a collection of German Marklin cars and trains, mechanical toys from Lehman and a large number of wooden toys made by prisoners from Danish prisons decades ago.

At the end of the 18th century, childhood began to be regarded as a special period by Europeans. A group of philosophers, doctors and teachers began to realize that the role of parents in childhood is far-reaching to children's future growth. In order to teach children more effectively, people have designed toys that develop the potential and imagination of young children and regard them as important educational tools. It was generally believed at the time that giving a child a specific toy could have an effect in a particular direction. Based on this concept, people at that time designed different toys suitable for boys and girls. In terms of design, boys' toys focus on the ability to cultivate communication so that they can actively participate in business activities when they grow up, while girls Toys are meant to cultivate their virtues, in order to make them better housewives in later life. In the toy museum, people will be able to feel that the concept of male superiority in Europe in ancient times has penetrated into the design of young children's toys.

The Danish Clock Museum showcases a well-equipped watchmaking workshop detailing the production of clocks and clocks. The museum houses a large collection of clocks and watches from Denmark and abroad, showing the development of the sundial, hourglass and mechanical timepieces: as early as the 16th century, the earliest batch of watches had only one pointer on the surface to indicate "hours", but Later, more complex clocks can accurately display the time of a fraction of a second or even the position of the planet.

The textile exhibition hall is scattered among the many buildings in the â€œold cityâ€. The purpose of the exhibition is to tell people the history of using fabrics at home, including the use of curtains and sofa cushions in various periods. Since the nineteenth century, Danes have tended to cover furniture with fabric. The towels are covered by embroidered linen, and the warming stove is covered by fabric during the summer. Due to the extensive use of fabrics in the 1890s, the interior of an ordinary family was described as a colorful box lined with curtains, screens and linen. The rise of functionalism in the 1920s changed the original trend and replaced it with a simple style.

In the "House of the Old Mayor", the trend and changes of interior decoration in the past 250 years are displayed. The Silver Pavilion exhibits the influence of baroque to functionalism on the design and development of silverware and manufacturing processes since the 17th century. The collection in the museum includes works by 310 blacksmiths from 44 different towns.

Today, the "Old Town" Museum has opened many buildings as wedding venues. For many local young people, a traditional Danish wedding is held in a place with such a rich sense of history, both sacred and romantic.

There are also five gardens in the "Old Town" representing different styles from the mid-17th century to the early 20th century. Built in 1750, the herb garden covers an area of â€‹â€‹300 square meters. The design is typical of the Baroque style. The garden is divided into 91 small lattices for planting different types of flowers, including fairy, mandala, mistletoe, belladonna, Snake, anemone and fennel. These plants were used extensively in medical applications in the mid-18th century.

Bernstoff is a typical commercial greenhouse where flowers, plants and spices are grown and sold to local village markets. The Wahlstrm Garden covers an area of â€‹â€‹700 square meters. It is a leisure garden. It has a lot of flowers and trees to watch, honeysuckle, lavender, cloves, lilies and so on. There is also a rare "old rose". In addition, the â€œOld Townâ€ also displayed a vegetable garden built in 1864, which was planted with a lot of edible vegetables for making salads and other dishes.

History is difficult to replicate. Many artifacts cannot be restored once they are destroyed, because the sense of the accumulation of history is irreplaceable by any other item. For this reason, the meaning of "old city" is so special, it not only shows the history of Denmark and The customs also reflect the Danish people's nostalgia and cherish for history.

The Galvanized Wire Dog Playpen is similar to the galvanized tube dog playpen.The playpens can be installed with any shape, like square, rectangle, hexagon, octagon,etc.It is easy linking and flat packed without other tools.Other features including powder coated, Anti-rust,use long life and each door has one lock for security and to stop you pet escaping. 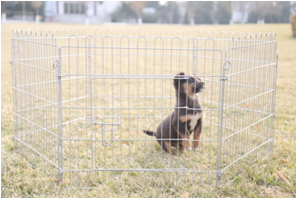